One of my colleagues, TerraSystems Southwest, is assisting The Nature Conservancy in Tucson with the Sonoran Desert Disturbed Lands Analysis project. As part of their scope of work, they were asked to assess the level and type of land disturbance for over 100,000 1-square mile hexagons covering the Sonoran Desert.

As you might expect, editing the attributes of 100,000+ polygons is not a trivial task, and TerraSystems approached me to help find a way to make their editing task faster. The solution we came up with was a custom ArcMap add-in that would enable them to quickly edit the attributes for a selected polygon and move to the next feature for assessment.

The ArcGIS 10.0 and 10.1 add-in was developed in Visual Studio 2010 using esri ArcObjects, and contains a custom toolbar, tools, buttons, and dockable window forms. The Add-in leverages the ArcGIS add-in framework for simple deployment and updating.

The Add-in quickly edits the attributes of customizable fields to record the following information about each hexagon:

The Add-in allows users to identify the layer and fields in which to record these attributes, so it is not hard-coded to a particular layer or field name. In addition, the Add-in records the layer and field assignments to an XML file for reloading in future editing sessions, so users only need to configure the Add-in once.

The main strength of this Add-in is time savings during editing, users can select a feature and quickly edit multiple attributes using two different editing methods: 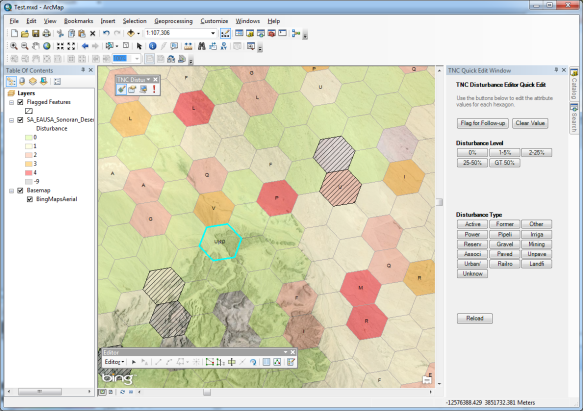 * The buttons and keys are dynamically mapped when the Add-in loads. So if users edit the XML files to register new disturbance levels and types, the Add-in will dynamically map a new key and add new buttons to the QuickEdit Window.

* Some times there are editing situations in which users prefer to not have the Add-in automatically select the next feature and/or zoom to the next feature. So both of these functions can be turned on or off in the Add-in’s configuration window.

Finally the Add-in contains help documentation showing users how to install, use and customize the Add-in.

By a conservative estimate, this Add-in shaves approximately 7 seconds off of each editing operation. Multiplied by the 100,000+ hexagons, the Add-in has saved nearly 200 hours on this project and countless hours on future projects that can leverage its customizable framework for future conservation assessment programs.

For more information about the Add-in see our website:

Error: Twitter did not respond. Please wait a few minutes and refresh this page.